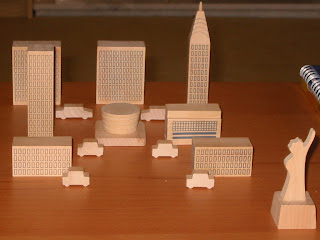 The Girl got me New York In A Box. Hee.

As nice as it is when a doctor takes your situation seriously, occasionally they can take you a bit too seriously. The GP today who refused to give me my antidepressants because "we don't give those to people with bipolar disorder," despite my assurances that not only have I been taking them for years (on and off), my psychiatrist also recommended that I be given control of that medication and choose when I want to take it. She has insisted on ringing my previous GP so that she can get a copy of the letter from aforementioned psychiatrist. Which is amusing, given that a) I stopped seeing him over a year ago, b) he proclaimed me practically recovered from the bipolar thing, and c) if she tries to get hold of him, he probably won't even remember me. Heh. So, I have no antidepressants! The Girl thinks that this GP is one of those doctors who doesn't like to give medication out for mental health problems. Which is good in principle - but it does mean that I get lumped in with everyone else, when I am used to being in charge of my condition and its treatment (as regards the bipolar thing, I mean). It's been a long time since I was refused medication for anything. It was quite funny. It won't be when I run out, though, and the anxiety comes back with a vengeance, so she'd better ring the old GP pronto.

Anyway, this GP was quite nice. I was very glad that I'd brought The Girl into the doctor's office with me, as I got a classic case of the fibromyalgia 'brain fog' and forgot what I'd gone in for as soon as I sat down. The Girl reminded me that I was there because I am unable to go back to work on Wednesday, given that I often can't hold a cup of tea or get up stairs, and therefore need signing off. The doctor signed me off for a month. I mentioned the possibility of leaving work, and she did not seem to be against this idea, clearly thinking that I shouldn't be working at the moment. Which was reassuring. I keep thinking, in my usual way, that this is all in my head. I need a lot of reassurance that it isn't. I'm hugely relieved that I don't have to attempt to go back to work straight away. That would not have been pretty.

So then we went down to the Citizens Advice Bureau, who seemed confused and sent me to the jobcentre. So then we went to the jobcentre, where they were less confused, but told me not to give up work as "your union can help you." Not with my bloody job, they can't - but that's hard to explain unless you know about education, and about my sector in particular. Nonetheless, they say that if I do decide to give up work, I can apply for incapacity benefit in the short term. I wouldn't want it for longer than a couple of months, as I plan to be working part-time again as soon as possible. I am not keen on the idea of living on benefits for any longer than I have to. Plus, I'm already bored out of my tiny mind, and I miss teaching like crazy. I keep looking forlornly at the books I've been doing with my classes, and wishing I had the energy and concentration to prepare some lessons. Freaky.

And now I'm exhausted, as we did too much walking. Our new area is great, though. We've got a big high street quite nearby, with its very helpful jobcentres and doctors' surgeries and cafes for cooked breakfasts, and then a bit closer we've got a little suburb with train/tube links, and a major A-road just a few minutes' walk in the other direction with supermarkets and some interesting little shops. It's a shame I haven't really been up to exploring since we've moved here. I will have to do some when I start increasing my exercise.
Posted by Naomi J. at 2:17 pm

Merry Christmas! And please, do let me into the secret of how to teach a newly-acquired Jewish/Israeli partner to enjoy Christmas. Mine is still hiding somewhere in the mountains of the Korean Penninsula...
(And yes, congratulations for making some tough decisions about work whilst the choices are there. Am thinking of and praying for you battling the bureaucracy...)

Thanks, Joy - prayers much appreciated at the moment!

i found your site through butyoudontlooksick.com

i'm also bipolar and have many other "unseen" issues. i just wanted to let you know that i'm thinking about you as you go through this tough time!