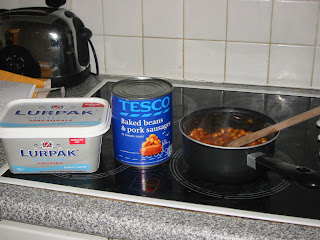 This is what happens when you shop online and don't check sizes. Saucepan provided for scale - but if you've still missed it, the tin and butter pack are, um, bloody huge. Whoops. 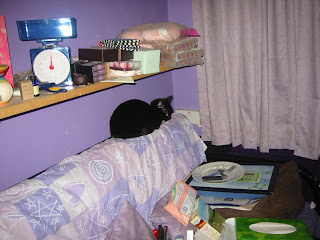 Here is a picture of Lisy Babe's tiny puddy tat. (I'm sure she's going to comment with something rude about how I shouldn't be posting pictures of her pussy. I thought I'd pre-empt that...)

I had a bit of a breakthrough today. I've been feeling bad/guilty/generally crap about many things recently, leading to shutting myself in the house and trying to avoid people. Mostly, this has involved an idiot who has made comments that I consider prejudiced, discriminatory and downright hurtful. I am working on the situation in positive ways. Nonetheless, that - and a couple of other incidents involving people's reactions to the chair/my illness in general - have been making me feel a bit pants.

Today began with me continuing to feel a bit pants. I have been trying very hard to get a gay Christian group with which I am involved to make their meetings more accessible - but I knew when I woke up that I didn't feel well enough to attend the whole meeting, since the social stuff afterwards runs into the late evening. So I felt guilty about that, since I demanded accessibility but wasn't going to use that facility much. I also didn't know if I felt brave enough to go in my wheelchair (I've never been to a meeting in a chair before). However, I really wasn't well enough to walk to church (where the meeting was being held), so into the chair I went. There were some questions, but on the whole people were great at ignoring it. I still felt guilty about silly things all day. "I have to stand up to stretch - what will they think?" "I need to ask for help with pouring the kettle - will they think I'm weird?" "I can't cope with having to stand in the queue for the loos - will people think I'm wrong for using the accessible toilet?" Gah...

Then, during the worship towards the end of the meeting, I had a sudden, massive breakthrough. I'd been sitting down through the songs and other 'please stand' parts of the service. I was having another stupid anxiety moment, this time worrying that people who had seen me standing up just ten minutes before would wonder why I wasn't being respectful enough to stand up for God (people don't usually 'get' how quickly my pain can fluctuate). When, suddenly, something went CLICK rather loudly in my head. My guilt and worry went *bang* as it occurred to me that if they really do object to me sitting down, which they very probably don't, then it's their problem. I made a real effort to get to the meeting. I made a real effort to get the rest of the Exec to make it accessible (and even though there were things that could have been improved there, it mostly was). I make a real effort in co-moderating this group and generally helping it to run as smoothly as possible. Anyone who can't see that, and is more concerned that I'm sitting down in the worship, is an idiot. Which is exactly what that person with the hurtful comments is, and exactly what everyone else is who says things like you're going to get dependent on that chair OR you should just go back to work - you'll never get better if you don't try OR you worry too much about illness OR do you really need that stick?... These people are not worth my energy. I have far better things to be using my spoons on. I am worth more than that. I can be proud of everything that I am - imperfect, non-functioning and human as I am, God has made me this way. And no one gets to criticise what God has made.

This may not seem like much of an epiphany. But, for me, it really really was. I hope I can hang onto it. It's important.
Posted by Naomi J. at 2:07 am

It's always good to have one of those moments when we just run up to a mental roadblock and just break straight through it.

Oh, and tell Lisy she has a very nice pussy.