Some people would look at my job and wonder what on earth I've got to complain about. I'm allowed to spread my 18 hours of work over three days per week. It's sort of related to what I'm trained to do. I work in a reasonably accessible place - an accessible toilet (shame about the non-disabled people who've managed to get hold of a key and keep breaking the door-closing mechanisms, so that I have to play contortionist in order to close the toilet door behind me), not *all* the doors are so heavy that I sublux my shoulder trying to open them (just some), the staff room's next door to my office and the room I mostly work in is just down the hall...

But the attitudes of people in my workplace are a bit - well, it's hard to pin down what's wrong with them - but it's sort of a 'this far, no further' attitude. I've had meetings with managers in which I've asked for reasonable adjustments that would cost nothing and bother no one, but because they're a variation on the norm, or mark me out as a different, they've been refused (as being 'unreasonable', essentially). When I asked for a phone to be put on my desk so I didn't have to get up out of my chair to answer it every five minutes, six senior managers appeared in my office and discussed this 'problem' very loudly in front of all my colleagues - I still don't have a phone (but now I refuse to answer any calls). One of my duties is in another building on the site, involving me crossing a lot of uneven ground for about 400 metres, and opening some extremely heavy doors including two sets of double doors - one day soon, these are going to cause me some real injury. My complaint about this, and suggestion for an easy solution involving me staying in my own building (it would only take a tiny reorganization of one other person's schedule) has been met with such shock and confusion that I may as well have asked for something that was going to cost £millions. Earlier this week I was abandoned during a fire alarm because procedures went wrong and they forgot me - I ended up having to negotiate two flights of stairs - subluxed a joint in my foot that still hasn't stopped trapping nerves - exhausted myself - and then was told I still had to go over to the other building. My manager thinks reasonable adjustments are 'unfair' because not everyone gets them. Attitudes. Not so good. No overt disablism - more like ignorance and institutionalized stubbornness.

In addition, at the moment I rather feel like I'm wasting what little energy I have on a job that I don't really enjoy and which doesn't make the most of my training and experience. Am I supposed to settle for this? The British Government, it seems, would say yes. (Just look at recent reports on what's going to happen to Incapacity Benefit to give you an idea of their thinking on this.) But why? Before I became disabled, I was told to be ambitious, to push myself, to aim high. Then I became ill with mental health problems and was told my goals should be reduced. Then there was The Wheelchair, and my DEA started putting me forward for jobs as a dinner lady. When I was previously heading for posts in middle management and beyond. Um. What? No. I've been doing this job for two months, and already I'm deeply unsatisified with it. And bloody exhausted.

So I'm probably going to apply for a Master's, hopefully to start next September. I'll be paying for it myself, of course. And retraining after just three years in my previous job is not ideal - especially when I *really* loved teaching. Alas, the stress levels and un-inclusive policies (and many other problems) did not create a sustainable environment for me to work in. Maybe, through studying a completely different subject, I can start to move into another area of work that I'll actually enjoy. I hope so, because I really want to work and to enjoy working. But I won't achieve either of these things if I keep trying to work in my current sector - education. It isn't set up for disabled people, generally speaking (there may be educational establishments that are the exception to this rule). And that's a real shame. Maybe if more students had disabled teachers they'd develop more inclusive attitudes.

In response to the Government, I'd like to state that I WANT TO WORK. In particular, I would like nothing more than to return to my previous job. But the barriers there are too difficult for one person to climb over. Especially from a wheelchair (and with joints that don't work and fatigue that won't lift and mental health problems and a learning difficulty and a very understandable headache). I think this disablist wall needs an automatic door put in...

Conclusions? I have none, really - feel free to give me yours.
Posted by Naomi J. at 5:20 pm 7 comments: 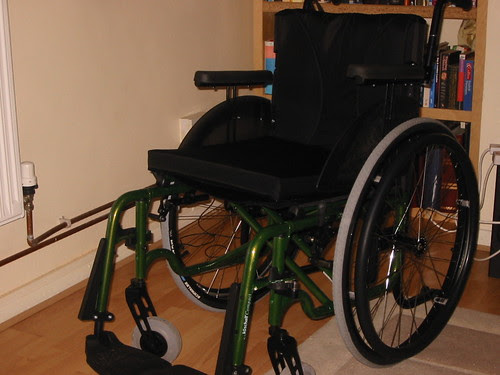 Well, I was awake at half-past five in the morning, again. This irritating state of affairs, dear readers, has arisen because of a wonderful painkiller called tramadol - it does quite good things for my pain levels, and horrific things to my head and my sleep patterns and my ability to walk in a straight line (which was never that great to begin with). Can't win. Apparently this is typical of this exciting condition thatI've just found out I have - painkillers aren't all that effective, so the side effects aren't often worth the effort. Fabulous. A condition with the effect of chronic pain, on which painkillers have no effect. Clearly God has a sense of humour. Bah.

However, the main events of the past month have been largely satisfactory, with just a few things bringing me down. I shall discuss some of these events. (Aren't you lucky.)

I've been stressing about the whole DLA saga since January, when I first applied, and especially since March, when I applied to appeal the decision (of lower rate care - I got higher mobility). A couple of weeks ago I went before a panel to argue my case. After much crying, arguing, stressing, trying to persuade a doctor that EDS is a real condition, and generally losing the plot, I was awarded higher rate care (and the higher rate mobility was confirmed).* This is simply marvellous. The backpay will help me if I go for the course I'm thinking of taking next year - but that's another story for another post. It generally helps me in a number of ways that are Very Good, not least because it gives me a bit more money to live on - which I desperately need if I'm going to fund my own physiotherapy for the EDS.

Meanwhile, I've fallen in love - yes, I have a new woman. (See above.) She's crazy, and lovely, and always wants to be on the go, and gets me from place to place much more easily than I ever thought a manual wheelchair could. She is called Luna (we went through several Harry Potter names before settling on that one - she just wasn't a Bellatrix or a Rowena). She is fabulous.**

Beyond that, nothing particularly exciting going on here. Work is driving me slightly crazy. The meeting that I set up with Personnel was OK, but not great. After a fifteen-minute detailed discussion over whether I could leave half an hour early on days when I was tired, which left me feeling incredibly guilty for being ill, I chickened out of asking for even more flexibility in my hours/days. It was never going to happen. These employers are quite good when it comes to physical adaptations - I got a sliding door put in between my office and the staff room in the space of two weeks - but they can't cope with anything unusual, and they don't quite understand the concept of reasonable adjustments. Yes, I should be fighting for my rights and the rights of future disabled employees. But at some point I need to stop being an ambassador for disability equality, and start getting on with being a teacher. If I don't, I'm going to go a bit mad. I'm already feeling very low about my career, my future job prospects, my ability to balance work with being a rather ill person, etc. I have A Plan for getting myself out of the drudgery, but it's going to take some time. Meanwhile, I'll be the one asleep on the desk in the corner...

*The Girl tells a different story. She swears I cried for exactly the right amount of time (about 45 seconds, she says, which was apparently my quota), said all the right things, defended myself and my condition admirably, and was able to argue like the coherent professional I am (heh) while also demonstrating that I am useless enough to meet the higher rate criteria. The woman is delusional, but she's convinced that's how it went.

**The Girl gets a bit upset when I'm this excited about her. Heh.