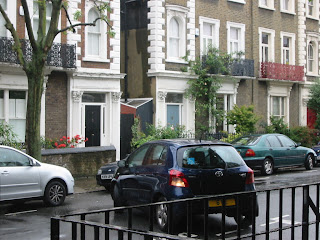 I just drove to Lisy Babe's house and back again (stopping there for a while in between, obviously). This is a Big Deal. It's the furthest I've driven for about five years, at least in London. I can drive a long way in Ireland (where 'driving' tends to translate 'sitting behind a tractor for five hours on the one-lane road between two major cities'), and to lesser extent in the New Forest, where I've done most of my driving. London driving scares me a lot. I'm not a bad driver - hesitant, but safe. I'm a really, hugely anxious driver though. This is mainly because I get lost, frequently, because I'm so dyspraxic.

To explain: I can't easily see directions, roads, landmarks in my head. I can see some of these, but there will be big 'gaps', and in those gaps will be where I get lost. I can only 'feel' them. I'll know, eventually, that I'm not on the right street, but only because it won't feel right. Maps are even worse. When The Girl first met me, she made the rather stupid mistake, a few times, of asking me to navigate while she drove. After many temper tantrums, a lot of near-violent arguments and several death threats, she's stopped doing that now. One cure for this is to try to work with my brain, not against it. I think visually, but I access those visuals linguistically. Written directions - detailed - on the dashboard used to work for me. Leave Hatch Road by turning right onto River Street just before the pub. Continue past 1, 2, 3 side roads on the right and a cafe. Cross two sets of traffic lights. Then turn left immediately after Barclays bank. The only problem with this being that the directions have to be so detailed, I tend to stop looking at the actual road...

I also can't drive if someone else is in the car with me - can't see that ever changing - since my driving nerves are a lot worse if I feel judged or watched. On my own I can get lost four or five times and it's not major. The Girl will attest to how I constantly SCREAM at her if I get lost, or even just get jumpy, while I'm driving with her next to me.

So, yes, only a five minute drive (for most people - clearly it's fifteen minutes if you allow for getting lost at least once in each direction, but I factored that in), but still quite a triumph. I should set my next goal. If I can get myself to church - a drive of at least fifteen minutes including a very scary four-lane interchange - then my social life will improve massively and I will feel a lot more independent (and less reliant on the rubbish limited service of Taxicard cabs, and not quite so much left at the mercy of ignorant bus drivers with appallingly designed ramps).

Lisy and I watched the weirdest film ever. It was Korean. Really quite disturbing, although oddly entertaining too. I think I missed a lot due to conventions that I just didn't understand. Parts of it made absolutely no sense.
Posted by Naomi J. at 9:13 pm

I think you are very brave to drive in London (shudder) I realised about half way through this post that perhaps it's not usual to get lost going to and from places you've been many times? Then I decided perhaps knowing I'd got totally lost going to the BYM's and driven round aimlessly in a big circle til I accidentally found my way there might be of some consolation. I've lived in this area most of my life. See, massively brave to drive in london. BG x

YAY YOU!!! I have a good friend with similar driving related issues. She usually will come pick me up but I have to drive to the next destination. Which i don't mind. i think we both feel safer and more relaxed. get this.. she drove in NEW YORK- fast paced and all. She was so excited and owes it all to a navigation system. TOM TOM I believe is the brand.

I hear you on the lost thing. I once got lost for 8 hours in one day, in two cities. Esther

Okay, I am going to come back and comment on your driving issues (and navagation) but I REALLY need to know the name of the Korean film - I have seen like almost ALL korean film (well of the last 15 or 20 years), it is, "My little Bride?" is it "Cassahan"? Sorry, OCD taken over.

Driving in London? Bloody hell, you're a braver woman than me.

Have you thought about getting TomTom or similar sat nav system? Dad swears by his.

BG: I reckon hypermobility and tendency-to-get-horrendously-lost go hand in hand. Same reason as why I'm dyspraxic and why I bump into absolutely everything and drop stuff all over the place. Apparently there's research been done. I couldn't quote it, though... :D

Sweet Cocoa: Ah, I drove in New York State for a year. Admittedly that was pre-impairment, but still, I got lost just as much back then. It's SO much easier to drive in North America. For one thing, they don't cram so many cars onto tiny roads, as they have enough space to avoid this. As no doubt you know by now! :)

Rosamundi: Heh. I would love a TomTom. I would also love an automatic car that doesn't leave my knee in ridiculous amounts of pain after a fifteen minute drive. Alas, The Girl has some kind of moral objection to both of these. Don't ask... Maybe she'll see this post and finally change her mind!

Elizabeth: Heh. Apparently you're a geek. What a surprise ;) You should talk to Lisy - she gets to *study* this kind of thing. (She's a writer for Ouch, too. But she gets to write the proper articles. I am a bit jealous.) Anyway, the film was called Old Boy. Do you know it? It was weird. But the most disturbing thing about it was that I found it entertaining despite all the utter weirdness. Is this kind of complete craziness normal in Korean film?

Yes, it is part of a trilogy (the Vengence Trilogy) - and yeah, there were parts (toward the end) where a little LSD didn't seem to go amiss. I would recommend the last one, Lady Vengence - which is more about the idea of "justice" and can a woman ever forgive herself for doing something, even if she was forced or manipulated into doing so. Very good, very little of the "icky".

Wha? Wha? She gets to write "proper articles"? - what have I been at? And what does Korean film have to do with Ouch!?

Thanks for telling me. I recommend Friendship, Once Upon a Time in a School and Memories of Murder for a good roundup of "nice" Korean Films - oh wait, you HAVE to see the film Foul King - amazing! Okay, I went a bit geek there. Tell me a country and I will do a film thing for you.

TG: I hope you are realise that you are keeping me in my oppressed state by refusing to help me to purchase technology that would reduce the social barriers in my life. So there. :P (Missing you, Russia Girl.)

Elizabeth: Damn. Now I want to see the others to see how it ends. That's just cruel.