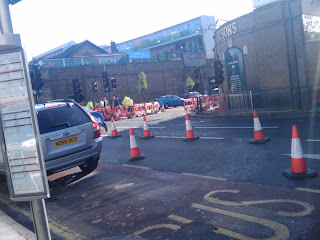 The scene not far from my road which I encountered on returning from Camden this morning. I'd been working in a cafe for a couple of hours. Heading back home, I found the road blocked off in all directions, including the dropped kerbs, with no temporary ramps and no warning signs.

The workmen acted like I was entirely bonkers for suggesting that they might have wanted to make their roadworks accessible to disabled pedestrians. "But we're only going to be here for an hour or so."

Not that we expect any better than that from you, really.

I once phoned Leicester council to complain about the fact that they'd dug up the dropped kerbs at a major junction and not put in a temporary accessible alternative.

About half an hour later I looked over FOCUS's balcony and temporary ramps had been put down.